Benjamin Atkinson and the Action Horse Team present to you a celebration of the Horse!

Adrenaline and acrobatics combine in the speed of the Cossack trick riders.

Power and grace in the dance of dressage and the explosive airs above the ground made famous by the Spanish Riding School of Vienna and breath taking Liberty. The silent art of compassion and connection as horses perform with absolute freedom in a finale to move the soul and inspire the mind.
A team of riders, trainers and performers with credits on the silver screen pale into insignificance as they stand beside these magnificent animals.

A true celebration of the Horse.

A fast paced carriage driving sport offering family entertainment at its thrilling best. Watch ponies and carriages fly around an obstacle course against the clock.
The BSTD is a National club and some of the best drivers from all around the country will be coming to the show to drive their ponies to try to be the 2021 Show Champion.
Marvel at the skill of the drivers, the bravery of the grooms and the agility of the ponies as they compete around a timed obstacle course. The audience will be encouraged to shout and cheer for their favourite ponies and teams and all shapes and sizes of ponies will compete against one another from tiny miniature Shetlands to the larger native breeds.

UK and they are here to give us highly entertaining demonstrations with the aim of giving us better understanding of our dogs’ behaviour.

These rescue four legged friends, both trained and untrained, feature in the arena to entertain and educate on common dog issues. Showing their natural instincts as they herd Indian Runner Ducks.

Chandlers will show a crop of wheat, represented by a swath of straw, being harvest 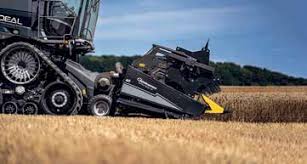 ed by a combine where the grain is separated from the straw and then unloaded into a trailer while on the move. The waste straw is then square baled ready for use for livestock bedding.

At the same time, they will demonstrate the power of hydraulics, as one tractor lifts another on its front mounted three point pick-up hitch, while lifting another on its rear linkage, a total lift weight of approximately 10 tons.

Founded in 1894, Cirencester Park is the oldest Polo Club in Great Britain. Just a stone’s throw from the show site, the Club is set in 3,000 acres of parkland and woodland and plays host to a full fixture list throughout the season.

If you’ve always liked the idea of Polo, but never understood the rules, now is the time to hear from experts with demonstrations of basic hitting and passing skills, and to round off the display an exhibition chukka.

The Hound parade by Vale of White Horse Hunt & Royal Agricultural College Beagles takes place in the Bathurst Arena. Everyone is welcome to come and meet the two packs after the parade.